I’ve always surrounded myself with lots of houseplants. For me, a house doesn’t feel like a home without them. I grew up in a house full of them. My mother could always find a spot for just one more. Last summer, my brother repotted one of my mother’s only remaining houseplants, a philodendron. He’d discovered my father had continued to care for it these last 25 years after her death. It was looking a little sickly but considering its age, not too bad. It’s now living in a senior facility – along with Dad.

Sixteen years ago as we prepared to leave Massachusetts to head south, I had a “plant adoption brunch.” Anyone attending had to take a plant with them as they went. Years later, I continued to get updates on some of them. I did have plants that traveled with us to Virginia, and they tagged along in our RV as we explored the country for several months. While driving, they sat in the bathtub; at a campsite, they sat up on the dash.

Since then, my collection of plants has grown and this time adoption was not an option.

Downsizing with My Plants

As we became full-time RVers, I planned on bringing all my plants with us. Downsize was not a word I would apply to my plants. But when there is greenery spread about 1,250 square feet, it’s not until you bring it all together into one spot that you realize how much space they all take up. Being generous, we have about 300 square feet in the RV, so I knew I had a problem. I eventually conceded that some of my indoor plants were going to have to become outdoor plants.

I used the USDA plant hardiness zone guide to pick a few I thought could live out there safely. Southeastern Virginia is zone 8a, so if necessary, the aloe plants could stay outside. But being one of my favorites, I wanted them inside with me. Other favorites, like the jade and snake plants, had become very large over the years, and there was just no spot big enough for them. But the winters here can get a little too cold, and it was a risk. I felt like a mother bird pushing them out of the nest.

Shelter in the Cold 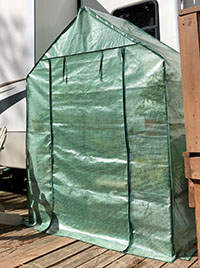 For about three months, I carefully watched the weather reports for falling temperatures. I thought I might have to get into the habit of dragging them all inside at night. But I was lucky that the early winter months were mild long enough to figure out that we needed to get a greenhouse. A small ceramic heater made sure the plants were safe from the cold. 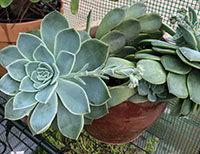 They seemed to thrive in the greenhouse, especially the hens and chicks. I get my love for plants, if not talent, from both sides of the family. My earliest memories of visiting my grandmother were seeing these pretty little, spikey plants along the rock wall leading to her door. I was fascinated by them. I bought one a couple years ago after learning that I could keep it as a houseplant. It has since produced many chicks that have themselves become hens. 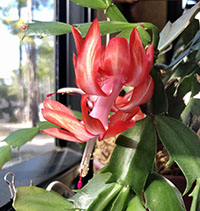 Those plants that remained inside have also thrived. The RV has light filling the main room from windows on three sides. An orchid that in twelve years never produced more than three flowers is currently showing nine flowers from its thirteen buds. The Thanksgiving cactus, which sits on the corner of the desk, has had its second bloom in five months. And one of the small snake plants now living inside could become large enough to get pushed out of the nest by fall.