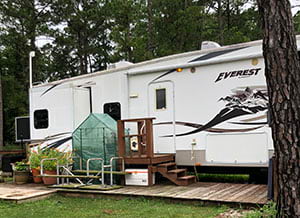 In June, we started our first hurricane season since moving full-time into the RV. Watching the daily weather for wind speed became a habit soon after we began our life on Muddy Creek. South or southeast winds above twelve miles an hour mean there is a possibility we’ll be sloshing about in knee-high rubber boots. Flooding is not unusual here. But since June, any sign of a tropical storm took on extra ominous meaning than ever before in our lives. We‘d entered hurricane season.

It wasn’t until August that we had our first scare. Two weeks ago, a tropical storm started turning into Hurricane Isaias. As it approached, I increasingly looked for guidance on google as to how to best prepare for storms while living in an RV. “Simply don’t camp in the southeast or coastal areas during hurricane season!” Well, that’s helpful, I sarcastically thought. Advice on how to find the safest location and at what angle to park the RV was also not helpful. We don’t tow our 5th-wheel, nor do we even have a vehicle powerful enough to move it.

I learned that our rig could withstand winds of up to 53 mph, broadside, without tipping over. It could also withstand higher speeds if struck from the front. Designers of RVs know strong winds will pound them as they are pulled along highways and thus design for it.

We’re lucky that on each side of us, there are other big RVs to buffer us from some of the broadside wind. But several nearby trees were worrying me. What if they come down on us, and how much force can the roof handle? I wouldn’t say I liked anything I read about this topic on the web.

When Do You Leave?

When we decided to become full-time RVers, we assumed we’d move into a hotel when bad storms were on their way to Virginia Beach. A friend has lived here, in a mobile home, for forty years, and that is what she does; she’s done it several times in the eleven years I’ve known her.

But when do you decide that the time has come? I discovered it wasn’t easy to pack up and abandon our little home. After downsizing so much, the possessions we cared about most were with us in the RV. There were the urns of all our dogs, favorite pieces of pottery, plants that have survived for over a dozen years, and a small collection of books.

Anyplace we chose to go would have to take pets, and I retrieved Chumlee’s crate from the storage unit. But what about the fish—the thought of leaving them bothered me. If there’s no power and we’re not here to start the generator, how long could they last in the tank without filtration, heat, and food? Yes, they’re only fish, but even fish feel pain and suffer. Richard thought I was silly to worry.

Getting Ready for the Wind 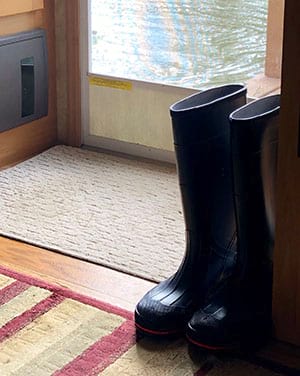 Forecasters predicted that the storm would hit us the hardest in the early hours of Tuesday morning. The highest wind speed I saw was forecast to be 55 mph. On Sunday, we got everything outside the RV put away, or latched down.

Midday Monday, we decided to ride it out; so did several neighbors. (I’d checked with my friend and she’d also decided to stay in her home.) The transient campers left the campground. We all moved our cars to the highest ground available to protect them from flooding that would undoubtedly occur. The generator was filled with gas and prepared to do its thing. Our tall rubber boots stood near the door. We had food, water, coffee, and beer. We were ready!

The Sun Will Come Out Tomorrow 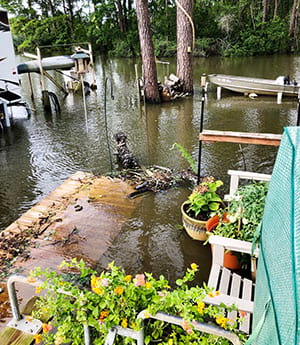 I slept through most of it! By late Tuesday morning the sun was shining. As expected, the waters of Muddy Creek surrounded the RV and flooded the roads. The high winds continued for much of the day, bringing in more water to glisten in the sunshine.

Much of Virginia Beach lost power, some for over 24 hours.  We were in that group. What I hadn’t expected was the loss of tap water. The pump for the campground’s well had no power until Wednesday.

It was a very hot, humid day, and we didn’t run the AC in order to conserve gas in the generator. Despite the miserable heat and lack of running water, I was glad we had decided to stay. Our fish agreed.

One thought on “Living in an RV During Hurricane Season”