Moving is a significant stress factor in anyone’s life, but moving into a smaller space adds the daunting task of getting rid of lots of stuff. There are many decisions to be made and downsizing can be overwhelming. Richard and I have done this four times in the last twenty years, each move into smaller homes. It isn’t easy, and lots of emotions come into play.

I had to develop ways to rationalize what I would or wouldn’t keep and ways to help ignore the guilt associated with items from people I love. These are some questions that would run through my mind as I plowed through cabinets, closets, basements, and attics.

But there is another critical question that is missing from my list.

About twenty-five years ago, I bought a small plate rack for our kitchen wall. I’d been collecting hand-painted plates and needed more display space. The dishes and rack survived our initial downsizing back in Massachusetts.  Over time, I stopped collecting them. When we decided to make our big move to Virginia, I sold the dishes on eBay and no longer had any need for the rack. I put it into the donate pile and hadn’t given it another thought in all these years—until last spring.

We have a small storage shed at the front of our RV and a stark white wall faced drivers coming down the road. I wanted to make it more attractive for our little neighborhood. At the time, the home stores were selling annual spring flowers, and I thought some of them would brighten that bare space. When I mentioned this to Richard, he said, “Maybe you can do something with that plate rack I have in the shed.”

Since moving to Virginia, we’ve done two additional downsizings, the last one being quite significant—into about 300 square feet. I had no idea that the plate rack had left Massachusettes with us and that it had made it onto Richard’s “keep it” pile each time we subsequently moved. He’d been storing it in the garage.

Who knew? I was pleased to see it again, and Richard had been right—it was perfect.

As I have mentioned elsewhere, being more environmentally conscious has become a high priority since moving into our RV full time. Repurposing that plate rack felt good.

What didn’t feel good was that I’d purchased precut veggies that came in a plastic container. I felt obliged to reuse it somehow and had stuck it in a cabinet—taking up valuable storage space. It occurred to me to cut it up and use the individual compartments as small pots. I was then able to squeeze them into the plate rack. After a quick trip to buy some annuals, the shed wall was no longer an eyesore to the neighbors. 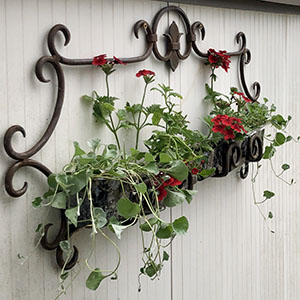 I was raised by a father who readily admits that he has trouble making decisions. But I must have taken after my mother, someone more willing to decide matters. In my world, a wrong decision is better than no decision at all. And downsizing is not for the indecisive.

But what’s the worse that can happen? You can always replace stuff you’ve decided not to drag along, and maybe you’ll find something better. And by the way, perhaps it is okay to keep something just because you like it.

3 thoughts on “Downsizing Decisions for Beginners”