As I sit here, the sound of rain bouncing off the tin box we call home surrounds me. It awoke me last night, and my first thought was about wind speed and direction. If from the south or southeast, we could again find ourselves becoming an island in Muddy Creek. Today the wind is out of the north, and the only nuisance is the wetness outside.  That was not true last week. 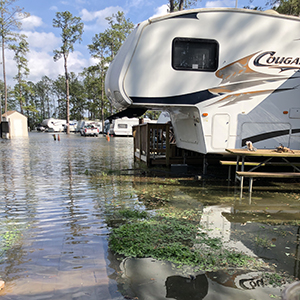 So far, water is one of the only troublesome aspect of living in our RV. Of course, this is not a general negative to RV living, but of where we chose to do this living. Water from the nearby North Bay drains into and out of the Muddy Creek; when winds are strong, and from the south, water in the area along the creek will rise three to four feet.

When the road floods leading to the campground, I need to be watchful for ducks and fish floating over the pavement. The flooding is not all bad, though. I enjoy watching the ducks glide over someone’s front lawn. And large herons also make appearances to get some fast food, as the fish are visible in the shallow water against the green background.

As the water was being pushed back out into the bay last week, I needed to stop and rescue a big catfish. It was caught halfway to the roadside drainage ditch when the depth became too shallow for her to make it across. I stopped, climbed out of my car, and sloshed over to where the poor creature struggled. I’d never touched a live fish before, and she was determined not to be my first. She kept squeezing out from between my hands, like toothpaste from a tube! 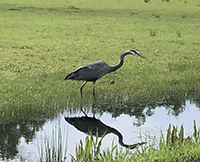 But as she angrily swished her tail back and forth, splashing me, it kept hitting the ground and propelled her forward. She moved closer and closer to the ditch. In the end, I needed only to get my hands under her hind end to flip her into deeper water. Pleased and congratulating myself out loud, I turned to find someone waiting in their car at the edge of the puddle watching the show. Drenched, I plodded back to my car and headed home. I’d probably only accomplished giving a heron some fresh sushi. Oh, well.