Bird and birdwatching news has been flooding my various social media feeds. I suspect my google searches about identifying the birds I’ve seen at our feeders, and in my travels, have driven this overload. Although, in the time of this pandemic, it appears everyone has decided to do some birdwatching. It’s easy to do while isolating ourselves from the rest of society, even for city dwellers. The Associated Press reports a 10 – 15 percent increase in the sale of birding merchandise. 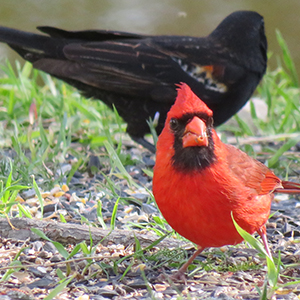 Back when we published a pet tabloid (Pet Tails Magazine, 2005-2014), I wrote an article about birdwatching. I had needed to plug an empty hole on a page, and it was very popular at that time, too. It was in May of 2009, and we were nearing the end of The Great Recession. Watching birds was a cheap hobby and a way to do something together as a family without spending lots of money. Birdwatching seems to be the go-to panacea for what ails our society.

Richard and I used to enjoy bird watching when we had a home in Massachusetts. It had a large, raised deck, and similar to our RV home, it abutted nature conservation land. Our house backed up to the woods, bringing lots of birds to our feeders. Most weekdays after work, we would sit on the deck with beers and binoculars to destress from the day. I can’t say that the birds helped as much as the beers, but the pair complemented each other well. (When birds not native to Massachusetts started to appear at the feeder, it was time to head inside.)

Now that a wildlife refuge surrounds us, the birds are impossible to ignore. We have a small pair of binoculars that came with us from Massachusetts, and we have put up some feeders. Although there is not near as much stress in our lives these days, we still end most by watching birds – and having some beers.

I now find myself watching birds while I walk dogs, too. With businesses closed and folks staying home, I can hear the early morning cacophony of bird noise in a neighborhood. It’s no longer drowned out by the rumblings of cars and trucks, or the roar of low flying planes from Norfolk Airport. It is amazing how loud the birds can be and how unique each one’s call. But I’m not yet ready to identify a bird by the sound it makes; I use it only to know in which direction to look. 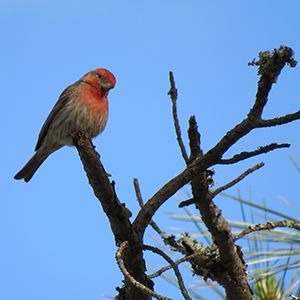 You would think this is an easy hobby, but it’s not – at least the identification part of it. Often after noting the type of bill the feathered creature has and remembering that I need to check out its tail, the flighty critter has taken off.

Frequently, there are very slight differences between species. Do you know how hard it is to tell a house finch from a purple finch? This guy is a house finch — I think. I downloaded a bird identifier app from the Audubon. I like it in part because it helps me remember all the things I need to look at to identify a bird properly. It also has multiple pictures of the same type from different angles, which other apps I have tried do not.

I next need to start keeping a journal of those that I have seen. I am sure there’s an app out there for that, too.

Listening to podcasts has kept me sane the last few years, as I drive all over Virginia Beach to visit animals needing care. The variety of topics that they cover is amazing. So when I decided to see if there was one on birdwatching, I wasn’t surprised to have a half dozen pop up on Apple Podcasts. I’ve now subscribed to the American Birding Podcast and Out There With the Birds. If nothing else, they will get my mind off the pandemic and stop me from listening to so many of the political talking heads.

Protect the Birds For the Next Time

During the last few months, our planet has begun to heal due to our efforts to contend with COVID-19. There is less air pollution, the rivers are cleaner,  and sea turtles have returned to deserted beaches to lay eggs. But what about wild birds?

Despite their ubiquitous nature, the bird population in North America has been on a decline. Over three billion have disappeared in the last fifty years. The main reason for this decline is the loss of habitat, something not easily restored in a matter of months. But there are things we can all do to protect them. Here are a few:

We never know when the next pandemic will strike, and we’ll be needing to pull out the binoculars for a bit of birdwatching.