Home On Muddy Creek > About Us

One morning in the early spring of 2003, I joined Richard in the kitchen for coffee. I didn’t want to go to work, but that was true of most mornings. Whatever had once been enjoyable about writing computer software or working in an engineering environment was entirely gone. Unaware that I had even been thinking about it, I suggested we quit our jobs, sell the house, and move to another part of the country. Without hesitating, he said okay. He had retired from the world of high tech the previous year and understood my desire to leave it. 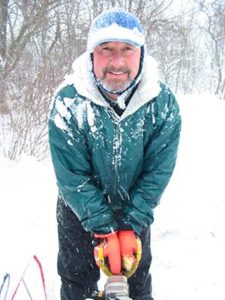 It was not only work prompting my desire to move. The long, cold, snowy winters of Massachusetts are no fun, and it’s lots of work sometimes. We needed to head south. Maybe southwest? But where?

I discovered a website called FindYourSpot.com. After a 15-minute quiz that we each took, it created a list of about a dozen places where we might enjoy living. The types of questions were hugely varied, including things such as what you enjoy doing, the kind of weather you like, how religious you are, the types of entertainment you want close by, and do you prefer mountains to the seashore.

Fortunately, both our lists had some of the same places. Although North Carolina, New Mexico, and Arizona were appealing, Richard’s brother Roger lived in Virginia Beach. It is also less than a days drive from our family in New England. By June, we’d made the decision. We were headed to Virginia. 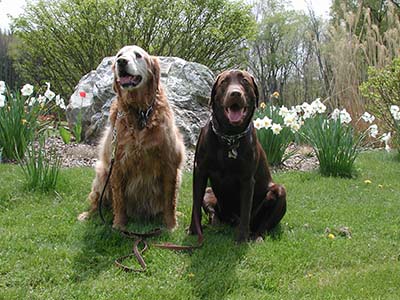 Several years before this, we had been driving down the highway and passed a camper with a dog looking out a window. I never liked leaving our dogs home when we took vacations, so I casually said to Richard, let’s buy an RV. That way, we can take Jake and Baxter with us. Again without hesitating, he said okay.

Before finally settling down in Virginia Beach, we figured it was a perfect time to travel the country, most of which we’d never seen. As we waited for our condo to be built, from June through November of 2004, Richard, Baxter, and I wandered from state to state in our Class A, Fleetwood Bounder. (We had lost Jake earlier that year.) 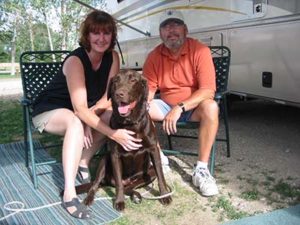 We found it comfortable living in a small space. I’ve never been able to stand clutter, which is fortunate for a confined space, and cleaning was less of a hassle–since I’m not a great housekeeper. My tolerance for dust is much too high. Although a large, 90 lb. Labrador could be an obstacle, Baxter’s preferred indoor spot was up on the sofa. But when he did decide to do some floor lounging, it was an excellent excuse to postpone vacuuming.

Richard and I are both able to read and concentrate surrounded by noise. I suspect it’s a skill that comes from years of working in an open office environment.  If one of us was watching TV, it wasn’t an issue for the other to read. Living in campgrounds also led us outside for some alone time. 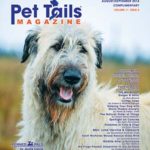 We moved into our condo in December of 2004. I started an in-home pet care company, and Richard had a part-time job and did lots of golfing. For about seven years, we published a free, bi-monthly, pet tabloid (Pet Tails Magazine), which we distributed throughout the Hampton Roads area of Virginia.

Because Richard was president of the condo’s board of directors, living in the community got to be lots of work for him. After twelve years, we downsized to an apartment close to where we had a seasonal campsite. Any time that I could free myself up enough from work, we headed to the camper.

We enjoyed our condo, and the apartment we had was very nice, but we always longed to be living in an RV again. There is an ease and peacefulness to the environment. And the more time we spent at the camper, the more we didn’t want to go back to the apartment. When presented with the opportunity to stay full time at the campground, we took it!

We downsized again in October of 2019, and love our small, RV home on Muddy Creek. Our new life had begun. 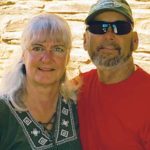